As the UN observes World Day of Remembrance for Road Traffic Victims, at least 13,620 lost their lives and over 1.19 million people have been injured in 996,032 road traffic crashes in 32 districts of Punjab in the last 1,609 days.

As many as 703,407 injured people, or 71% of the total victims, were shifted to the hospital in an unconscious and unstable condition. This was according to data of road traffic crashes (RTCs) from June 17, 2013- November 14, 2o17. The figures were compiled by Punjab Emergency Service Rescue 1122.

18 killed in accidents across Punjab as smog engulfs province

Besides leaving thousands of people dead or handicapped, road traffic accidents affected the lives of many families as many bread earners fell victim to RTCs. Data showed that 79.38% of the total victims, i.e. 948,750 victims, were male of which 51% were between the age of 21-40.

On average, nine people lost lives and 619 people were injured daily. Keeping in view the loss caused by RTCs, it was a matter of grave concern was that these numbers had increased with each passing year. 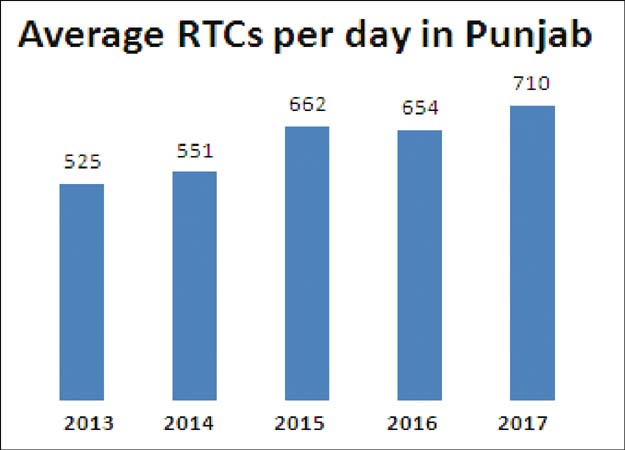 The average number of casualties caused by RTCs has increased steadily since 2013.

Lahore topped all the 32 districts in road accidents. Lahore was followed by Faisalabad, Multan, Gujranwala and Bahawalpur with the highest number of incidents.

A total of 8,870 RTCs were caused by bursting tyres and 840 were the result of wheelies. Data compiled by Rescue 1122 did not carry poor road-infrastructure as a cause behind RTCs.

The number of causalities may be higher than the data of Rescue 1122 as many victims, who were alive but unstable at the time of shifting to a hospital, may have died some days later.